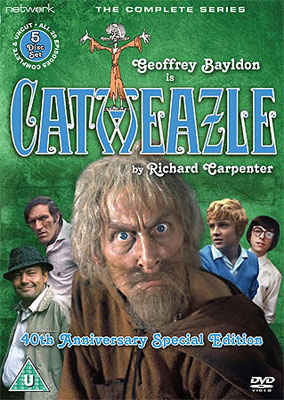 A cult TV show from 1970 is celebrating 40 years with a DVD reissue – Catweazle: The Complete Series – 40th Anniversary Edition.

No, that's not a hippie or an escapee from a late 60s folk band, it's Geoffrey Bayldon as Catweazle, a bumbling magician trapped in and fascinated by a world 900 years ahead of his time.

This new DVD set comes with limited edition packaging, exclusive postcards, a new 40th anniversary introduction to the series by Geoffrey Bayldon, a new documentary, commentaries, interviews, image galleries and PDF material including merchandise, magazines, annuals and scripts for all episodes. The five-disc set is available via Network from 29th March 2010, selling for just over £35.