Here's a more modern item than we usually feature, but if you want something that screams the 1980s, this Bang and Olufsen Beocom 2000 telephone is it.

The phone was designed by Lone and Gideon Lindinger-Loewy in the 1980s, continuing in production until late in the 1990s – but the colourful colour scheme tells us this is an earlier model (the bright colours were killed off in the early 90s).

Functional as a modern home phone and known for its excellent sound quality, an early use of a digital display, number memory, pause function, built-in speaker – there's even a hidden note pad. It's on a 'Buy It Now' for £89.99 – or for the more frugal, a 'Make Offer' too. 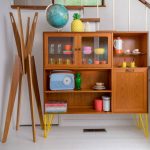