Another movie inspired by the past is heading to the big screen this summer – Made in Dagenham.

The film stars Sally Hawkins as Rita O'Grady who is the catalyst for the 1968 Ford Dagenham strike by 187 sewing machinists which led to the advent of the Equal Pay Act.  Working in impoverished conditions and doing long hours, the women at the Ford Dagenham plant finally lay down their tools when they are reclassified as 'unskilled'. Unwilling to accept it, they take on their corporate paymasters, an increasingly belligerent local community, and finally the government itself. 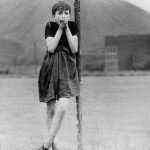