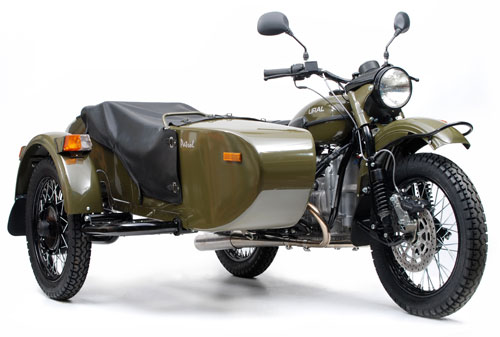 Back in 2007, we featured the Irbit Ural retro motorbikes and sidecars and this week, the company got in touch to tell us it has launched a 'new' model. Specifically, the Ural Patrol T motorbike and sidecar.

If you missed it first time round, the Urals are new-builds (using modern parts) out of Siberia, but now sold via the US, with designs dating back to the middle of the 20th century and based on BMW bikes of the time.

The Patrol T is the latest off the production line, described as a 'sport utility motorcycle', originally designed to perform in cold, wet and icy off-road conditions in the Siberian wilderness, the bioke has a modern OHV air-cooled 4 cycle opposed twin cylinder engine, Herzog gears, Brembo brakes, Domino controls, on-demand two-wheel drive sidecar and up to 33 mile per gallon on the fuel.