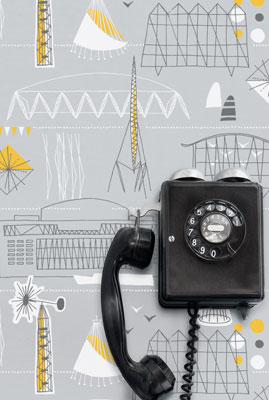 It's quirky, cool and very retro – the newly-launched Festival Wallpaper by Mini Moderns.

This midcentury-inspired wallpaper celebrates the enduring influence of the 1951 Festival of Britain, the post-war exhibition of the new wave of modern British design, which celebrates its 60th Anniversary next year. If you look closely, you'll see highlights of that exhibition – the iconic Skylon, the Dome of Discovery and the Royal Festival Hall, not to mention the Transport Pavilion and The Lion and the Unicorn Pavilion.

The wallpaper comes in 10m x 52cm rolls printed with waterbased inks on paper from sustained forests and in three colour options. Festival is apparently the first design in the new Mini Moderns Day-tripper collection, launching in September 2011, which celebrates aspects of British culture, hobbies and pastimes. See another shot of Festival over the page. 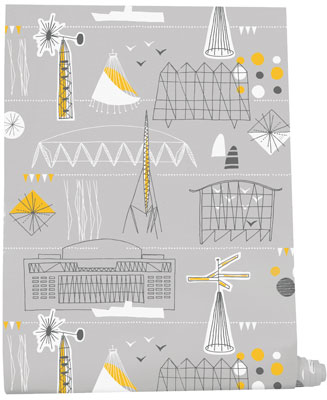