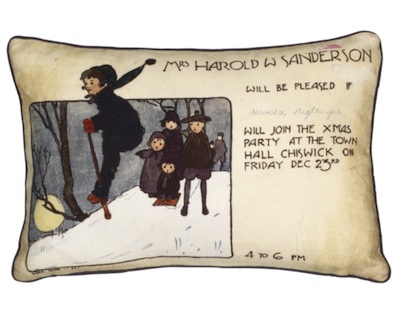 Last year was the 150th anniversary of Sanderson and we featured many of the products produced as part of their celebration, including the range of cushions produced using some of their textile designs. Their range has also expanded beyond this, to include designs based on ephemera in the Sanderson archive, such as this skier cushion.

The cushion is based on an invite to an early Sanderson bash and also features an appealing illustration showing a skier against a wintery background. There's no year given on the invite but it looks like it dates right back to the early days of the company. If you like this, there's also another design based on an Edwardian design for the company.

Made from linen, the cushion costs £35.

Buy it from John Lewis