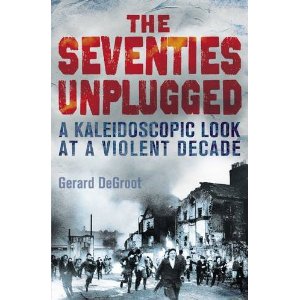 In his last book The Sixties Unplugged, Gerard De Groot proposed that the 1960s weren’t the happy-go-lucky radical decade of popular belief and now in his new book, he casts a similarly unbiased eye over the 1970s.

The Seventies Unplugged: A Kaleidoscopic Look at a Violent Decade takes an episodic approach to the decade, looking at some of the major political events around the world. In his introduction, De Groot writes that he wanted to move away from the stereotypical view of the 1970s as not being as good as the 1960s, but found that the theme that dominated his research was how violent the decade was. With chapters on dictators, terrorists and Vietnam, it is a pretty serious read and certainly not your typical beach book (although I read it on my recent holiday).

It is available in paperback from Amazon, priced £5.84

1960s Quant by Quant book republished by the V&A

“All Books Should Have Pictures” Illustrations & Prints