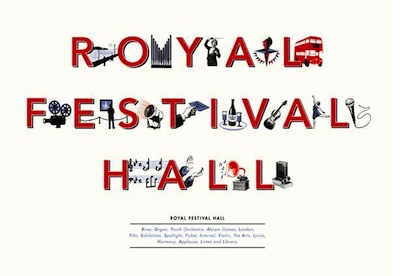 The print by Chase and Wonder celebrates some of the special quirks of the Royal Festival Hall.

If the name Chase and Wonder sounds familiar, they're the duo behind the Lady's and Gentleman's A To Zs we featured a little while back which used detailed, retro styled illustrations to decorate each letter of the alphabet. This print uses the same principle but bases its illustration on the name of the building. For example, you get Abram Games's Festival of Britain logo for A, the Festival being the reason the Hall was built in 1951, while the O is illustrated by the Royal Festival Hall's 7866 pipe organ.

Buy it from the Southbank Centre