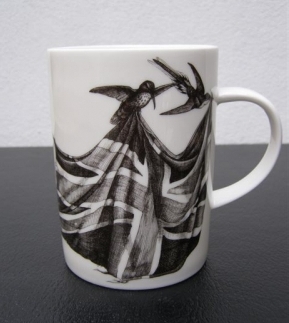 With the glut of Union Jack designs we saw earlier in the year (especially around the time of that wedding), I thought nothing featuring that design would ever appeal to me again. That was before I saw Rory Dobner’s Marvellous Mugs.

The mugs feature jet black intricate ink designs that are Dobner’s trademark and amongst each of the six images is the Union Jack flag. These being Dobner drawings thought it isn’t in a context you would expect – it is flying between butterflies or hummingbirds in two of the designs, wrapped around a sausage dog and a rabbit in another two, the duvet cover over a bee in bed and behind a lion in another.