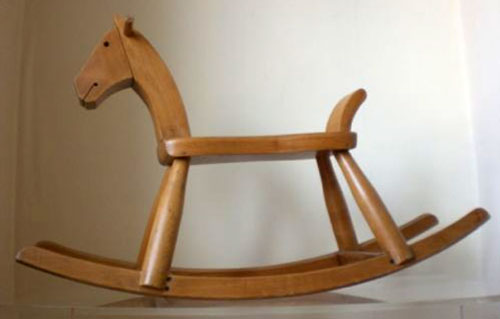 We have featured a reissued one of these in the past, but if you don't want to pay around £500, you might get this Kay Bojesen midcentury-style rocking horse a lot cheaper on eBay.

The rocking horse was originally produced back in 1942 and made of beech, with a horse intended to have a 'trustworthy and open face' for reassurance. Reissues are available, but far from cheap, which could make this one an interesting lot.

It's interesting in other ways too. The horse has age, which the new one doesn't have, as well as subtle design differences – compare the legs and the tail for example.

The one up for auction is said to be from around the late '50s or early '60s and doesn't have the Kay Bojesen stamp, but there is a 'curious white circular plaque' pinned to the underside of his tail. As for condition, it is said to be 'good solid gently played with' condition.