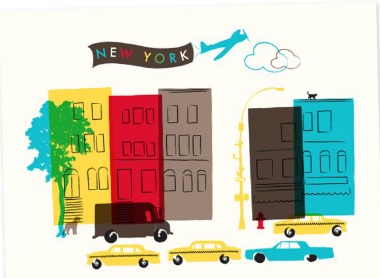 It's a classic subject matter but one that's hard to resist, especially when it's as nicely executed as this New York City print by Ruka Ruka.

With its sketchy style and bright colours, the print looks very much like it has come out of mid-century America, rather than Britain in 2012. If the Big Apple isn't your destination of choice, the UK-based studio does also produce accompanying prints for both London and Paris. But perhaps the best thing about the print? It also comes with options of personalization – your name could appear on the banner flying off the back of that plane.

The print costs £15 ready-made, or add an extra £10 for the personalization option.

100 Years Of Fashion by Cally Blackman

One thought on “New York City print by Ruka-Ruka”