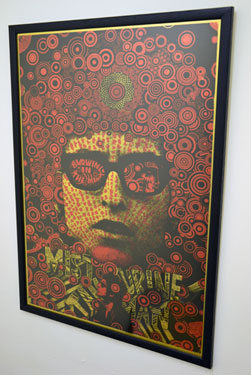 If you know anything about 1960s graphic design, you should recognise this picture-“Mr Tambourine Man” by Martin Sharp. Originally created in 1968, the image has been reissued as a limited edition print.

Martin Sharp moved to the UK from Australia in the 1960s and worked for the underground magazine, Oz. His posters have continued to be sought after by fans of psychedelic design, so last year it was decided to reissue some of his most popular designs. Probably his best known work, Mr Tambourine Man is a psychedelic portrait of Bob Dylan – it is currently available in a limited edition of 350 prints. Other designs available include his Legalise Cannabis poster and a Jimi Hendrix print.

Buy the Mr Tambourine print for £350 from Martin Sharp website.

Portobello Road: Photographed in the Sixties by John Petty