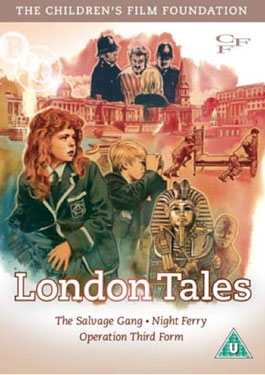 It is described as the 'first themed DVD collection of films made by the CFF', so we can perhaps expect more volumes from the BFI to follow The Children's Film Foundation – London Tales.

The Children's Film Foundation was a non-profit making body, set up in 1951 by the owner of the Odeon and Rank cinemas to make home-grown entertainment for young cinema goers to see at the ‘Saturday morning pictures’.

They continued over 30 years, taking on a stream of soon-to-be famous directors and actors along the way, as well as capturing the eras when the films were made. The BFI now has the archive (400 films) and is busy transferring them for the modern era.

The first three are released in one package, featuring The Salvage Gang (1958), described is an affectionate tour of bomb-damaged London with young Frazer Hines (Doctor Who, Emmerdale) and  Wilfred Brambell (Steptoe and Son), Operation Third Form (1966), described as a 'pacey boys’ own adventure' with a 'groovy 1960s soundtrack', along with Night Ferry (1976), which stars Bernard Cribbins as ‘Pyramid’, a dastardly master-of-disguise who plans to smuggle an ancient Egyptian mummy out of the country.

Topped off with a children;s theatre short and illustrated booklet, it;s available to buy from 23rd July 2012, with Amazon doing pre-orders for a discounted £13.