It's very much of its era (that era being the mid-1970s), but still a functional thing if you happen to love spinning a bit of vinyl now and again. The colour is described as 'pop orange' and the deck and the built-in speaker are powered by batteries or mains.

As for condition, that is described as 'wonderful cosmetic condition, extremely clean' and is 'free from cracks, gouges or broken parts'. The only issue is the pick up holder, which doesn't lock the arm anymore, but 'a little piece of paper' can do the job. 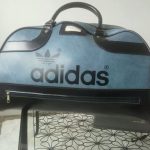