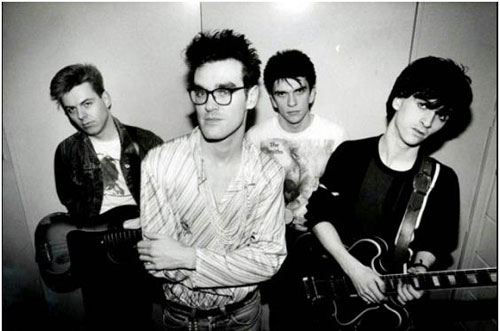 After last year's Bowiefest, we have something else along similar lines at London's ICA – Smithsfest. Yes, you guessed it, a celebration of The Smiths.

If you're a fan, it should be quite a weekend too. Taking place over Friday 29 – Saturday 30 March 2013, the weekend will 'survey the artistic and cultural impact of The Smiths'. Or to simplify things, will feature a load of things that will almost certainly appeal to fans of the band.

Curated by Amy Lamé, the weekend event will include a London debut of Terry Christian's solo show Naked Confessions of A Recovering Catholic, plus a double-bill of A Taste of Honey & The Leather Boys introduced by Rita Tushingham, two films that she starred in and that were a huge influence on The Smiths.

Mark Simpson, author of Saint Morrissey, will be holding a discussion on Morrissey, while Open Barbers will be delivering Moz Makeovers, if you want a quiff. MozTerMind will be answering all your questions, DJs The Readers Wifes will play a Smiths inspired set and there's an exhibition of exclusive Smiths and Morrissey photographs by photographer Tom Sheehan. More events are still to be confirmed too.

Full details will be published soon, but if you want to know more in the meantime, contact the ICA. Other similar weekends will also run over 2013, including MickRonsonfest on 27 April 2013, Blondiefest in Summer 2013 and Iggyfest in Autumn 2013.