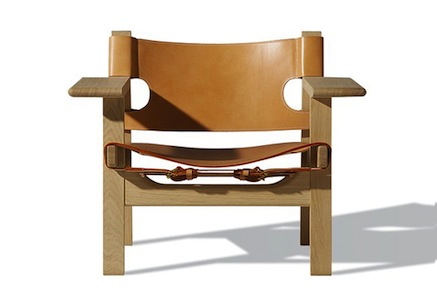 We've all done it. Fallen in love with something on holiday, gone to the effort of trying to recreate it at home, then realised it's not the same. But in the case of Børge Mogensen's Spanish chair, he succeeded in making it even better.

Originally made in 1958, the chair was inspired by a more traditional looking number that Danish designer Mogensen found while on holiday in Spain. He replicated key elements of that design – such as the wide armrests so useful for perching a drink – while removing some of the more folk art elements, and translated the design into oak and leather (the same materials used in his hunting chair) to eye-catching effect. The result is a chair offering an interesting twist on the Scandinavian mid-century look.

It's available in a variety of finishes for the oak frame and with a choice of natural or black leather for the seat and back.

It costs considerably more than a flight to Spain too. It's £2579 from TwentyTwentyOne.