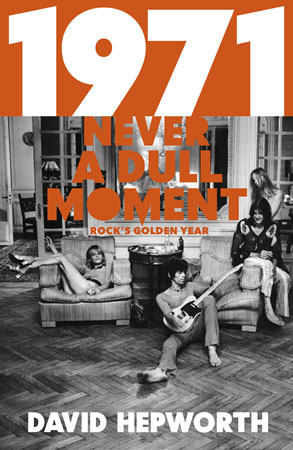 If you use Twitter and follow David Hepworth, you might have noticed him plugging a Spotify playlist promoting the merits of music releases from 1971. It seems it was for a good reason, to bolster interest in 1971 – Never a Dull Moment: Rock's Golden Year.

The basis of the book is fairly straightforward – 1971 was the year of the great album.

According to Mr Hepworth, 1971 saw the release of more ‘monumental’ albums than any year before or since and the establishment of a rock dynasty that would dominate the next 40 years – Led Zeppelin, David Bowie, the Rolling Stones, Pink Floyd, Marvin Gaye, Carole King, Joni Mitchell, Rod Stewart, the solo Beatles and more.

1971 saw ‘an unrepeatable surge of creativity, technological innovation, blissful ignorance, naked ambition and outrageous good fortune’ and by the end of the year, rock music was into the mainstream.

The book explains just how that happened over 400 pages. If that sounds like your kind of read, 1971 is out at the start of April via Bantam Press but available to pre-order now in hardback for a discounted £16.59.