20th May 2016 is 40 years to the day since the first-ever David Bowie compilation album was released. To celebrate that fact, David Bowie’s ChangesOneBowie is being reissued on limited edition vinyl.

It’s a funny one too. Apparently half of the vinyl run will be on clear vinyl, while the other half will be on black vinyl and as far as we know, you will not know which one you have until your order comes in. Nothing will be mentioned on the sleeve.

But the music will be the same on both. 11 of the finest tracks Bowie made, all remastered, so the sound quality should be a step up from the original release (if you have that).

Those tracks are listed below and if you want to order a copy, you can do that right now. It sells for £17.99. Note that there is a CD reissue too. 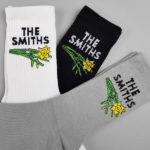 The Smiths socks by Socks To Wear