Officially licensed and a rather clever little item too. Yes, of course this is based on the iconic Imperial battle station as you can see, But what you might not realise is that it also comes with a remote control (with Imperial crest).

That allows you to light it up as either blue or red with green. If that’s not enough, this also plays the Star Wars theme and the Imperial March too. Sadly neither tune has bells playing in the background, but you can’t have everything. 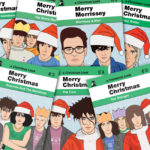