If you fancy going old school, check out the reissue of this Adidas Consortium Beckenbauer tracksuit.

To celebrate its 50th anniversary, Adidas Consortium has issued a one to one reissue of the classic Beckenbauer Tracksuit as a limited run of just 100 units worldwide.

You get the zipped track top and the slim cut pants with all the original detailing (including zipped pockets), which come in a ‘specially commissioned ‘presentation box, with a card telling the story of the item.

The tracksuit sells for £279. Also note that an Adidas Consortium Made in Germany Trefoil Tee is also available, complete with a vintage logo. That sells for £49.

Adidas Consortium Made in Germany Trefoil Tee at End Clothing 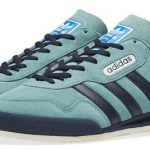 Adidas Trimm-Trab trainers get a reissue in blue and gold