One of the more anticipated shoe releases of the year, the 1970s Adidas Koln trainers are now available.

As you might be aware, this City Series shoe dates back to 1979 and remained in production until 1984. But it hasn’t been seen much since. Thankfully Adidas has seen fit to bring it back, tying in with the Cologne Carnival, which kicks off on the same day.

Described as ‘all-but identical’ to the 1979 release, the Koln has a blue upper, gum outsole, and leather three-stripe branding to the sides. Once again, simple means stylish.

Update: Many sizes are now sold out of this, but some sizes are still available at End Clothing, with others being sold on eBay. 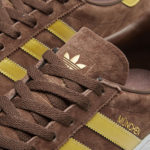