This is the oddest car you’ll see all week. But this 1970s Hustler 6 car is actually up for sale on eBay right now.

It’s almost like something created for a sci-fi movie back in the day. But this was a production car of sorts, designed in 1978 by Aston Martin Lagonda designer William Towns and later made into a kit car by his Interstyl design studio.

Only 500 were ever made and in varying specifications, all based around the Mini. This is a Hustler 6, which used two Mini rear subframes to give four rear wheels and has a 1275 Mini engine within.

Rare of course (I’ve never seen one for sale on eBay) and described as being in ‘excellent condition’. If you want it, you might have some competition as bidding has been brisk. Saying that, the price has only got to £1,905 so far. 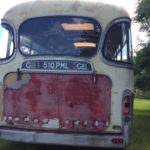