If you want to go old school with new school technology, then you might want to see these 1970s-style Capri e-bikes.

The Capri range of electric bicycles is inspired by French bikes from the late 1970s, offering a retro look, super-light construction (these bikes are around 16kg) and of course, electric power if you want to give your legs a rest.

They even have original 1970s paint jobs, taking their inspiration from metallic paint jobs of cars from that era. I love that kind of attention to detail.

But the big selling point is the fact that they are electric, but without it actually showing. If you didn’t know, you wouldn’t know. There is a small, but powerful motor giving the back wheel some power when you need it. Working alongside a 6.8Ah battery, you can get power for up to 40km from a single charge. There’s no mention of top speed and I would guess isn’t particularly fast, but that isn’t the point. It just offers a helping hand when you start to feel the pain.

The Capri comes in two versions, which are the Metz, with a top-tube frame, and the Azur, with a frame that ditches the top tube for twin tubes running diagonally downwards from the top front to the rear wheel.

Both bikes come with leather saddles and handlebars (there are variants with vegan leather too if you prefer), a bottle holder, and of course, those amazing paint jobs. It’s the little things that can set designs apart and in this case, the colours will be a big selling point here.

The bikes are produced in Italy using parts made across Europe, allowing the company to adhere to the strictest standards of bicycle production. It might bump up the cost a little, but it does underline that this is a quality product, built to last.

If you want one, the Capri models are being funded via an Indiegogo crowdfunding campaign and the good news is that the target was met in a matter of hours.

But you can still get your name down for one of the first bikes off the production line. Early bird pricing starts at £943 and note that all bikes ship worldwide too. 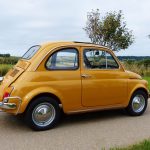