Orla Kiely isn’t just for in the house, it is rather dashing outside too. Check out the Orla Kiely bird house range for evidence of that.

I spotted one of these initially, but eventually the range (which doesn’t seem to be on the actual Orla Kiely site) showed itself over various retailers. Rather than you having to dig around and find them yourself, I’ve done the word and adding in all the links you need here.

All you need to do is work out which one your feathered friends would prefer to live in. That’s probably a tough call as all of these classic Orla Kiely designs are rather attractive.

Although I’m not sure what they will look like after a year or two of wear and tear, weather and general garden growth around it. Perhaps give it a clean now and again, but ultimately, this is a pine and plywood construction and isn’t going to last forever.

But it will look rather cool while it does last and as a bonus, it will also give small birds a hip home when they need it. The bird house also comes with drainage holes, a cleaning hatch and a hanging loop too. All of which will be very useful to you.

If you like the idea of turning your garden into a retro paradise one design at a time, this could be a nice first step. Expect to pay around £33, with the links to the retailers below. 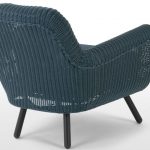 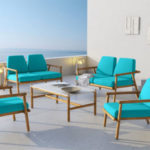 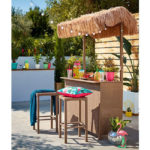 Grab a Tiki bar for your garden at George Home