Skip to content
54shares
Note all articles are independently researched and written by myself. However, if you buy via one of the links it may be an affiliate and I may earn a small commission.

I love a Dansette, especially one like this original 1950s Dansette Major Deluxe record player, which is being sold on eBay.

This is a full refurbished model, originally said to date to around 1958 (I would have thought 1960s but I’m going with it) and ‘looking superb’ in baby blue and cream according to the seller.

The case has been re-covered in a new ‘Rexine’ type leatherette material, which probably accounts for the freshness of the player, while the playing deck, which will play up to eight records consecutively, has been cleaned, lubricated and adjusted.

The valve amplifier has also been checked and had new components fitted where necessary, while a new three core earthed mains lead and 3amp fused plug is also fitted to be compatible with modern safety regulations.

The record player is also fitted with a modern stylus and cartridge which is safe to use on your stereo records and if you want to get into the 21st century, a plug in Bluetooth device is also part of the deal, which allows you to play music from your phone, tablet and so on through the record player. Not that you buying it for that, but it’s a nice bonus.

Just one word of caution though. If you have your eye on the legs / stand (pictured on its own below), note that it is not included. But it can be purchased for an additional £40 if bought at the same time.

Talking of buying, the current price on the player right now is £62. 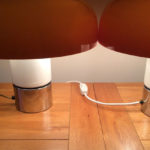