I can’t resist a 1960s Twiggy image, so this 1967 Vogue Twiggy print by Ronald Traeger at Heal’s is right up my street.

It’s a slightly confusing one as the print is part of the King & McGaw collection, but isn’t available directly from that retailer. You need to go to Heal’s, which looks to have an exclusive on it.

As for the print, well that’s something of a classic. American photographer Ronald Traeger arrived in the UK in the early 1960s, eventually collaborating with Vogue and capturing what was eventually known as swinging London.

This is one of a number Traeger took of Twiggy in Battersea Park and an image that eventually made its way onto the pages of Vogue in July 1967. It’s a classic and is still timelessly cool over 50 years on.

The image has been printed on semi-gloss paper, which is ideally suited to photographic images and is finished with a solid wood frame. if you want it on your wall, Heal’s has it for £90 online and instore.

Note that you can also get a Cecil Beaton image of Twiggy from a few months later at King & McGaw.

You Are Here and May We Help You? – vintage-style London maps by Herb Lester Associates 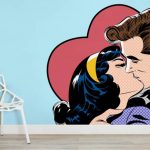