If classic football gear is your thing, you might want to have a look at the new Juventus Retro Collection by COPA.

I have mentioned COPA previously. Specifically when I picked out its retro track tops, which are certainly worth checking out if vintage sportswear is your thing. But this is a slight departure from that.

The label has started to do some ‘capsule’ collections, taking in various shirts and clothing that represent different eras of a variety of football clubs. Not just the ‘big boys’ either, with teams such as Nottingham Forest also lurking in its archive.

But COPA has just released the Juventus Retro Collection, so that seems like a good place to start.

The collection goes back to 1952, stopping off at various points after that, including the UEFA Cup in 1977, the 1983 – 84 season when Platini guided Juve to their 21st scudetto and won the European Cup Winners Cup in a distinctive yellow jersey, adding on some rather lovely retro jackets too as well as a ‘My First Juventus Shirt’ for the younger fans as well.

All are official Juventus items made using ‘the highest quality fabrics’ and all items are packaged and dispatched in ‘luxury’ gift boxes. So if you know anyone who is a fan, you might want to keep this in mind for Christmas. If they don’t support Juve, it’s probably worth checking out the archive of other clubs too, which covers similar ground. 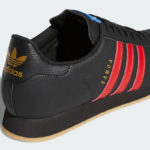 1980s Adidas Samoa trainers back on the shelves