Skip to content
28shares
Note all articles are independently researched and written by myself. However, if you buy via one of the links it may be an affiliate and I may earn a small commission.

Is it real or not? The Classic Vespa Jetski by Pierpaolo Lazzarini sits somewhere in the middle.

That’s because the Vespa Jetski has been designed and costed, but has yet to go into production. The mock-up images give the game away on that front. So the concept is very much a reality, but you can’t actually buy one right now or for that matter, for next year’s holiday unless someone gets a move on.

The concept is a strong one. Based on the designer’s motto of ‘think about the future and never forget the past’, this is a jetski based on the Vespa 50 Special.

As you probably worked out, it is a design very much aimed at those who like having fun in the water when the weather gets warmer. But with more style than the majority of similar machines on the market. In fact, this probably has more style than anything else out there right now.

The design is as close as possible to the Vespa 50 Special, but without the wheels obviously. They aren’t required. But what you do get is a self-balancing system while the jetski isn’t actually running, making access for passengers easy while in the water.

When it does run it uses either an electric 39hp engine or a cheaper 330cc 39hp twin stroke engine, with both able to reach a speed of 32 knots and if you go electric, the ability to ride for up to three hours before requiring a charge.

The proposed cost of the electric model is around £19,600 and the twin stroke model will sell for £15,000. So obviously not cheap playthings when they finally do hit the market.

I suspect the initial publicity for this is to test the water (I know, bad pun) to see if there is a demand for this design and at this point. If you want to keep track of the progress of the Vespa Jetski, make sure you keep checking the Lazzarini Design website, which is likely to be the first place to announce it. 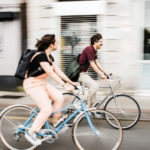 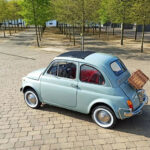