I’m guessing the year isn’t random. Fred Perry polo shirts in 1994 colours are back on the shelves because of Britpop.

Blur’s Parklife was released in 1994 at the very height of what is now known as Britpop and the Fred Perry polo shirt was front and centre not just for that band, but for plenty of other people in that year too.

To celebrate the year (which isn’t actually celebrating any kind of anniversary right now), Fred Perry has released a batch of its polo shirts in 1994 colours. Maybe the label thinks we just need that kind of optimism in our lives right now.

Whether we do or not, the Fred Perry polo shirt is available right now in the colours you see here, officials described as amber, cobalt, pomegranate, sky, evergreen and aubergine, but probably more simply named as the likes of yellow, blue, red and so on to you and I.

The shirt itself has changed a little since 1994, with a slightly slimmer cut, but it still has all the details you would want to see – a two-button collar, twin-tipping to the collar and cuffs, as well as the Fred Perry Laurel Wreath.

The price has probably jumped up a bit since 1994 too. You are looking at £60 from Fred Perry and a little cheaper if you head to End Clothing. 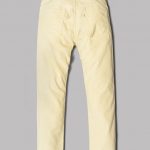