Want to feel old? Blur’s Park Life album is 25-years-old. To celebrate Park Life at 25, there’s some new vinyl and some reissued merchandise.

Of course, Park Life is modern-day classic and (arguably) the peak of what became known as Britpop. Every home should have a copy. But that’s not the reissue I am talking about here.

The new vinyl is Live At The BBC, which was recorded live at the BBC in Manchester on 7th March 1994, just weeks ahead of Parklife’s release. The recordings have never previously been globally available, but are now being issued on this 10-inch vinyl release.

The tracks on it are Girls and Boys, Jubilee, Trouble In The Message Centre and Lot 105 and you can pre-order it now for £9.99 ahead of the 2nd August release date.

Also on that date is a limited edition reissue of some original merchandise from that same year, featuring the likes of Blur FC and the dog track logo, as well as some band logo t-shirts.

You can see all of it online right now, which is a mix of t-shirts and tote bags. But you can’t buy it until that 2nd August date. When it does land, the t-shirts will be available from £20 in most sizes, with the tote bags at £15 each. 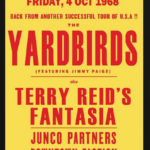 Marshall 50 Years of Loud print at Next

Elvis has Left the Building by Patrick Edgeley