For fans of The Beatles, the Yellow Submarine range for kids by Stella McCartney is very appealing.

The downside? These designs are strictly for kids. Well, almost. I suspect a few of the eye-catching bags might well sell to adults, but the clothing is only in mini sizes.

Not that adults have been ignored. There is a men’s clothing range as well as a women’s range, both of which are worth a look if you are a fan of the Fab Four. But they lack the ‘cute factor’ of the kids range here.

The range goes by the name of All Together Now, which you might well recognise from the Yellow Submarine movie and album and is just on the shelves, although you might have to look around for some of the more desirable pieces. Saying that most, if not all of the clothing is available right now from Stella McCartney,

That clothing plays on the themes and the style of the classic animated movie, a film described by Stella McCartney as having an ‘uplifting message of togetherness is an important one to instil at a young age’, which sounds about right to me. A classic good vs evil tale that works for (almost) all ages.

After seeing the movie again last year, Stella decided to reimagine it for a new generation, focusing on the imagery and costumes of the movie, which adds in a ‘dressing up’ element to the range and as such, added appeal to little people.

The outerwear is inspired by the marching band uniforms, Blue Meanies feature heavily across the clothing range and bright embroidery catches the eye on the bombers.

But there is no getting away from the two pieces everyone will be talking about here. As you can see from the images here, you can get that stunning Sgt. Peppers drum backpack. Designed to appeal to parents, it’s also a practical piece that will get your kids noticed on the schoolyard or on the park.

Of course, you can also get the Yellow Submarine rainbow strap bag too (also available at Children Salon), which is something a few parents might be sneaking into their wardrobes.

The downside? Stella McCartney’s range doesn’t come cheap and this selection is no exception to that. These are designs to be looked after and if you do that, they might have a strong sell-on value when your kids grow out of them.

The bags are available away from the Stella McCartney site. If you want the Sgt. Peppers drum backpack, it retails for £125 at Alex and Alexa. Similarly, the Yellow Submarine bag is £120 at Alex and Alexa too. That will put a dent in your bank balance.

If you have anything left for the clothes, the Blue Meanie jumper is £82, the dogs t-shirt sells for £48, the tie-dye band t-shirt is yours for £58, a military cotton gilet sells for £115, the bright faux-fur coat retails for £172 and that denim dress featuring the Yellow Submarine design sells for £77.

The age range runs from around 2 to 12 and the range is available to purchase now at Stella McCartney.

All images via Stella McCartney. 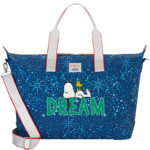