They first appeared a few years back but now you can get the super-cool 1960s Loog guitars for kids with built-in amps.

I featured these way back in 2016 and they proved incredibly popular. For good reason too, as that 1960s-inspired design is appealing to adults and kids alike But this is more than a pretty face, especially now the guitars have had an upgrade.

The new selection of Loog Guitars is now available to fund via Kickstarter, a platform that has been good to Loog in the past. The first guitar launched there back in 2011, while subsequent models also appeared there in 2013 and 2017. In fact, the Loog is the bestselling guitar ever on Kickstarter.

So with that in mind, this should be a profitable venture too, not least because you can get the latest models first and cheaper than the standard retail price.

The new Loog range feature three models, which are essentially three different sizes. Those are the Loog Mini (age 3+), the Loog Pro (age 8+) and the Loog Pro VI (age 12+). All of those guitars have a built-in amplifier and a built-in speaker and access to a free Loog app.

The Loog app helps your little one learn how to play the guitar via Augmented Reality using the selfie camera on your device, offering video lessons and games, as well as a digital songbook, helping them learn to play songs by The Beatles, the Rolling Stones, Taylor Swift, Bruno Mars and more. You can even record yourself playing with it. If you want to go old school, the guitars also come with flashcards, teaching beginners how to form chords.

‘The concept is to make it fun, easy and stimulating for anybody to play music. When you get a Loog, you get more than just a guitar,’ claims founder Rafael Atijas.

‘You get an instrument bundled with everything you need to learn to play songs. Kids are playing, learning and having fun from the very beginning, acquiring skills that stay with them forever.’

The guitars come in a choice of six colours, all of which are available to pick up via the Kickstarter page, where you can also discover more about each model.

If you want one first, you will have to support the crowdfunding project, as many already have done. A for the price, they start from $99.

Villa Julia by Magis – mid-century cardboard house for your kids 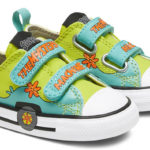