You don’t see these often and the return of the Adidas SL76 trainers as a limited edition is unlikely to change that.

When it comes to the ‘SL’, the 1972 version of the shoe is the one that is seen most often. I featured that a short while back, mentioning that these were the footwear of choice for Starksy of Starsky and Hutch fame in the 1970s.

But were they? I’m pretty sure that was the case although some people think that the later SL76 was his shoe, which was a design more contemporary to the show. As I said, I still think that was the SL72.

Not that it matters. The SL76 looks great, especially in this reissued green and yellow, which is exclusive to the Size? website. I would have said shops too, but as they are closed this will be a strictly online affair when it lands.

As for the design, this was the second SL (‘super light’) shoe and a step-up from the original, offering a combination of lightweight nylon and supportive suede overlays for the upper, adding in the Adidas ghilly-loop lacing system to keep things secure on your feet. As for the sole, it has a streamlined EVA midsole and a rubber toe-bumper to prevent any scuffing to the suede toe panels. Note also the serrated rubber outsole for plenty of grip when you are out and about.

Look out for this one from Saturday 2nd May, priced at £75 and sold in both men’s and women’s sizes, which is nice to see.

Update: These sold out ridiculously quickly, but there are plenty of pairs for sale on eBay right now. 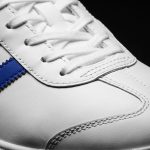 2 thoughts on “Adidas SL76 trainers return as a limited edition”