If you look vintage bikes then you might get excited about the TI-Raleigh 40, which is a 40th anniversary Tour de France bicycle.

I’ll be honest, I really want one of these. A classic and old school racer that takes me back to the bike I really wanted (and eventually got one Christmas) as a kid. Except the one I got wasn’t quite as cool as this one.

This is a special edition celebrating Joop Zoetemelk’s success 40 years on from the 1980 Tour de France, an anniversary edition bicycle and frameset of the TI-Raleigh.

‘We really wanted to mark this momentous milestone for the TI-Raleigh-Creda team, and what better way than to give fans the chance to get their hands on their very own anniversary edition of the winning bicycle!’ said Adam Snow, Raleigh Brand Manager.

As you would expect of Raleigh (which has done a great job of late brining back vintage classics) the TI-Raleigh has been recreated using the original features and selling points. So expect a Selle Italia Turbo 1980 saddle, the iconic red Reynolds 753 frame tubing, Cinelli bars, Mavic Rims, a Campagnolo Drive Train. Although it is worth pointing out that the new model has been equipped with a larger 10-speed cassette to get up any gradient.

It’s a limited edition too, which only adds to the appeal. Just 250 bicycles and framesets will be available, and each will come with a Certificate of Authenticity signed by legendary rider Joop Zoetemelk. So getting out might be a tough call, but it’s definitely worth trying and saving up in the meantime.

If you love old school cycling then you might be interested to know that Raleigh is hosting an exclusive online event that will include an interview with the man himself, Joop Zoetemelk, as well as an unboxing of the TI-Raleigh 40th Anniversary Edition bicycle, and a question and answer session with the Raleigh team.

As a bonus for signing up for that, you’ll also push yourself to the front of the queue for getting one of these bikes too. Which is nice.

Talking of availability, the bike and frames will be available for the general public on 1st September at 4pm. But signing up gets you in a little earlier. But before you get too excited, a word of caution.

This isn’t going to be a cheap bike. No decent bicycle is, but throwing in some period authenticity only adds to that. You are looking at £2,500 for the bike and £1,500 for the frameset. If that’s quite a hit, Raleigh will be doing it on finance to smooth the pain.

If you want to get your name on the list (without a commitment to buy) you can find out more at the Raleigh website.

Orders open for new Volkswagen Beetle in the UK 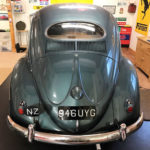