So what’s in a name? Quite a lot really. When it comes to Adidas, having a lengthy legacy is quite a selling point. So it seems odd that the Adidas Rekord has been removed from the range and replaced with an almost identical design using a new name.

Why? I honestly don’t know. Although seem much less today, the Adidas Rekord has been in the Adidas range for decades. The design has changed a little over the years but it is still a classic look and one that would sell by the bucketload if it got another reissue.

But it hasn’t. Instead, you are looking at this one, which doesn’t actually have a name printed on it. That’s surprising.

What it does have is a similar look without being an identical copy. The sole looks a little different, but the overall look is in keeping with the last reissue, which I think was in the early noughties.

Of course, a leather upper, suede toe, contrast detailing and two lovely old school colour options of white with green detailing and blue with white detailing. Personally, I love them both.

If either colours appeal (and you can see both from all angles on this page) they are available now, selling for £64.95. 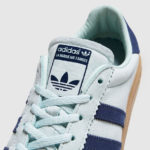