Skip to content
16shares
Note all articles are independently researched and written by myself. However, if you buy via one of the links it may be an affiliate and I may earn a small commission.

This one lands tonight – and will sell out. So stay up late to get up early for a pair of the Adidas Wien City Series trainers.

It is hard to judge just how popular and how much stock will be available with the City Series reissues. Some recent drops have been around for much longer than you might expect and a couple has even landed in the sales. Unheard of in the past.

But every now and then a shoe lands and sells out in minutes. I don’t know for sure if it will be this one, but my gut instinct is that it will. This has been something of a ‘holy grail’ for quite some time and I think the collectors will be all this. As will the more casual buyer too. It’s a great-looking City Series shoe.

As you may know, the Adidas City Series commenced in the 1970s, paying tribute to a variety of city locations with individual designs of the shoe. Ok, some of the shoes had more than a bit of similarity about them. But each had its own colour as a calling card. There were actually two versions of the Wien produced to celebrate Vienna. The one brought back here is the ‘classic’ that sits on top of most people’s ‘wants’ list.

The official colours of this one are Pride Ink, Flash Orange and Blue Bird, with the design typical of the era, a slim and low shoe with a suede upper, gum rubber outsole and branding to the side and on the tongue, with the Adidas logo on the heel. Basically, this is a one-to-one reissue of the original.

It’s a timeless look and as such, a design with almost universal appeal. That’s why this will be such a popular release when it lands. And it lands very soon.

The Adidas Wien lands tonight (9th April 2021) at 11pm or midnight, depending on your choice of retailer. I would recommend hitting the sites at 11pm and hoping for the best.

Which sites? Well, the usual Adidas City Series stockists. I would recommend checking out End Clothing, The Hip Store, Size? and the official Adidas Store if you want a pair. Some might well hold back until Saturday morning if you don’t see them late at night. Presumably, to make sure the launch goes efficiently. 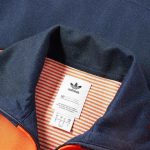