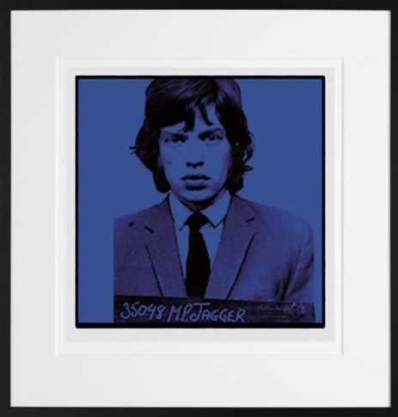 We’ve seen a similar idea used before on mugs and tea towels, but Sidoli’s designs have been given a pop art twist with each portrait having a brightly coloured wash over it, which he says is in tribute to Andy Warhol’s silkscreens. There are twelve designs, featuring all the usual suspects (if you’ll pardon the pun) including Sid Vicious, Mick Jagger, Al Capone , Jim Morrison, Frank Sinatra and Steve McQueen.

The framed giclée prints are each limited to 495 of each design and cost £399 from Washington Green.

Looking for something quirky and retro to read? How about The Life and Opinions of Maf the Dog, and of his friend Marilyn Monroe by Andrew O'Hagan. Just out in paperback, the novel is narrated by a dog – Marilyn Monroe's dog (given to her by Frank Sinatra) – talking us through the final years of her life and the world she lived in and left behind in the early 60s.

Rather than more explanation, check out the quirky 60s-style trailer for the book below, the work of Robin Davey and if you like what you see, you can pick up a copy at Amazon right now, heavily discounted to £6.50.