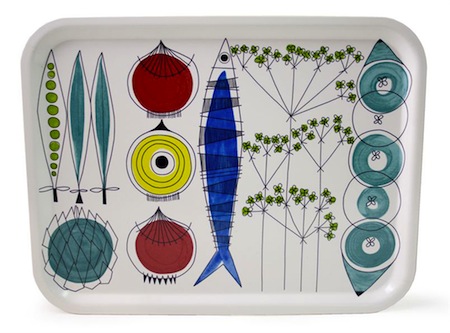 There's a lot of classic 1950s and 60s designs being re-issued at the moment with Marianne Westman's Picknick another one to add to that long list.

Picknick was originally launched in 1956 and shows a variety of Scandinavian food stuffs laid out as if for, you guessed it, a picnic. The sketchy depiction of the food is typical for the period and still looks fresh and appealing today.

That's good news for Almedahls who've been given the licence to reproduce the design. As well as the tray shown, it's available on a cutting board, a pot stand, a tea towel and a canvas bag.

The range starts at $16 for the tea towel while this serving tray costs $36.

Buy it from Huset 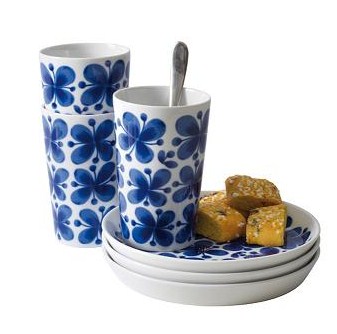 You may recognise Marianne Westman's Mon Amie design, created for Rörstrand in the 1950s. The blue and white design pattern has been a much loved Swedish design ever since. The company has now introduced it onto new, twenty-first century tableware, including this mug and plate set.
The handle-less mug and the plate are perfect for using for a stylish snack. Both items are made from dishwasher proof porcelain.
The set costs $54.
Buy them from Huset-Shop