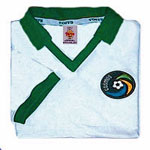 So, the new England shirt has been launched to cries that it harks back to the ‘golden era’ of football – that is, when we last won something 40 years ago. In effect, it’s nothing of the sort – just another stretchy t-shirt that wouldn’t look out of place in the bargain bin of Salford market.

What happened to proper shirts with their understated charm? They all disappeared – until being reissued by one far-sighted company. Toffs is the home of all your favourite footballs shirts and tracksuits of old – club shirts, international ones, even obscure vintage shirts from around the world. My favourites are the now-defunct clubs like New York Cosmos (pictured) and the teams that never actually existed in the first place – Escape To Victory and Melchester Rovers to name but two.

If you’re after a more recent reproduction though, beware – a right issue seems to stop then using any trademarks of original manufacturers. So my wish for Bolton’s promotion shirt of 1978 comes true – but it doesn’t have the Umbro diamonds down the arm. Oh well.

One thought on “Retro football shirts at Toffs”