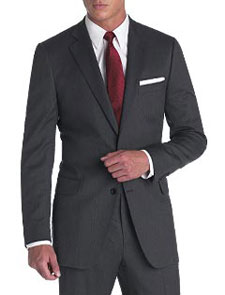 Brook Brothers certainly aren’t vintage, though many of their items still have a leaning to a past era – like this Brooks Brothers Fitzgerald Solid Two-Button 1818 suit, or for a shorter name, the JFK suit.

It’s got the JFK name because it’s based on suits that were made for John F. Kennedy in the early 60s. This two-button suit has a slimmer fit than the rest of the Brooks range, along with narrow lapels. There’s also a centre vent, full Bemberg lining, corozo buttons, double besom flap pockets and the trousers are both narrow and flat fronted.

Expect to find it in the newly opened Brooks Brothers store in London for around £599 or in the US for $898.

Adidas Beckenbauer Allround trainers get a reissue in white and grey