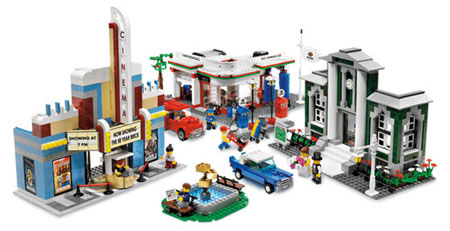 Lego is 50 years old today – and the company certainly isn’t going to let it pass without some new product – which includes the 50th anniversary Town Plan set.

It’s a special edition update of a classic playset, themed around 1950s America. So expect a 1950s-style gas/petrol station with pumps, car wash and garage, a town hall with a newly-married couple, a cinema with ticket booth, seats and posters, two vintage cars, eight minifigures and of course, lots of bricks.

In fact, as a bonus, there’s three gold bricks to celebrate the anniversary, along with a letter from company owner Kjeld Kirk Kristiansen, who actually appeared on the original Town Plan box as a child.