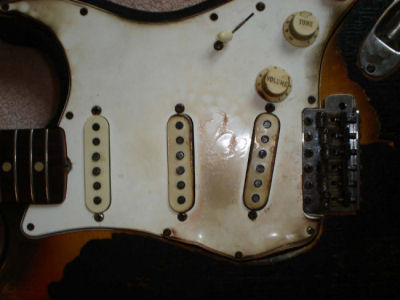 Jimi Hendrix’s 1965 Fender Stratocaster will be auctioned on 4 September. The guitar was set alight by Hendrix at the Finsbury Astoria gig in 1967 and remains the only surviving burnt guitar fully intact but with distictive burn marks.

The guitar is expected to fetch $1 million at an auction of musical artefacts at the Idea Generation Gallery next month, in association with The Fame Bureau. Also up for sale are the last surviving drum kit of Led Zepplin’s John Bonham, Jim Morrison’s final notebook of poetry and musings and a signed song sheet from Band Aid’s “We are the World” signed by stars including Michael Jackson, Stevie Wonder, Bruce Springsteen and Bob Dylan.

One thought on “Legendary Hendrix Guitar to be auctioned”