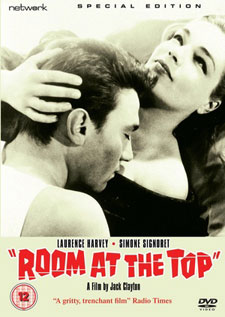 After doing a superb job with its This Sporting Life restoration, Network is reissuing another kitchensink classic with the Room At The Top Special Edition.

Adapted from John Braine’s superb novel, the 1958 film version of Room At The Top chronicles the life of ambitious working class lad Joe Lampton (Laurence Harvey), pursuing the daughter of an influential local industrialist (Susan – Heather Sears) before falling for an older married woman (Alice – Simone Signoret). He’s forced to choose between the two – but his choice only leads to tragedy.

The new version is a brand new transfer from the original 35mm film, with extras including an audio commentary, image gallery and press cuttings. Look out for it on 26th January 2009 – if Network send us one in advance, we’ll have a review before the release date.

Network is also releasing the once banned 60s flick Who Killed Teddy Bear at the same time – find out about that over at Cinedelica.