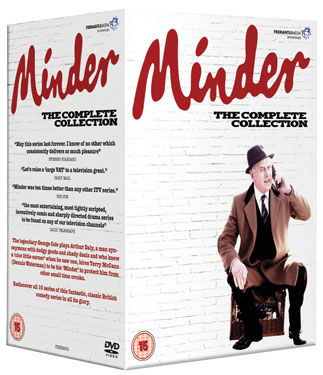 Well, with the new version currently underwhelming us on Five, it seems like the perfect time to reissue the original Minder in its entirety, namely Minder – The Complete Collection.

That title says it all, this is the original (and indeed classic) TV series, which ran originally from 1979 to 1994 over 10 series, with George Cole as wheeler dealer Arthur Daley and Dennis Waterman as Terry, his 'Minder'. Over 33 discs and 108 episodes, you can watch some of the finest comedy drama ever produced in the UK, as the pair make a living (one more than the other) on the mean streets of London. There's even the full-length feature film on here as a bonus (Minder On The Orient Express), along with all the usual DVD extras and commentaries.

Trust me, it's every but as good as you remember it – probably better – and in a different league to the remake. Look out for it from 16th March 2009, priced officially at £129.99 (but likely to be discounted by the big retailers).

For sale: Uncle Monty’s cottage from Withnail and I