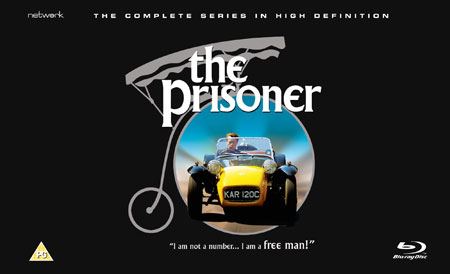 Invested in a Blu-ray player? Want to feed it something hip and cool? You're in luck – Network is about to release The Prisoner The Complete Series on Blu-ray as a six-disc limited edition box set.

The date for your diary is 28th September 2009, with the set containing all 17 episodes of Patrick McGoohan's 1967 cult classic in glorious high definition, along with a host of special features. Those include 'Don’t Knock Yourself Out' a feature-length documentary of the show told by those involved in its creation, a restored original edit of 'Arrival' with an optional music-only soundtrack featuring Wilfred Josephs’ complete and abandoned score, production Crew audio commentaries on seven episodes, trailers for all episodes, archive textless material, commercial break bumpers, behind-the-Scenes footage including much previously unseen, scripts on pdf, iamge galleries, an exclusive book on the making of the series by TV historian Andrew Pixley, 5.1 sound mixes on all episodes and much more.

The total running time is a whopping 850 minutes and the official price is £59.99 (although Amazon is already discounting to around £42 for pre-orders). Definitely one for the Christmas list.

Back To The Future Monopoly confirmed for launch