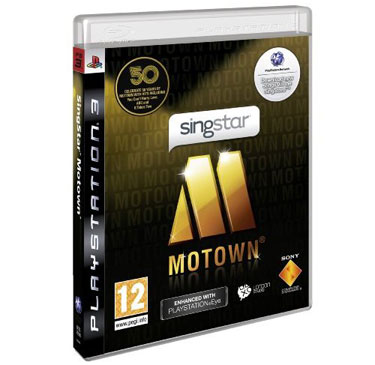 Let's be honest, who can resist a drunken night in front of the TV with a plastic microphone singing along to some old hits? Not us, that's for sure. Unfortunately, most of the music discs released forSingStar have been…well…a bit rubbish. That's until today, with the launch of SingStar: Motown, released as part of the Motown 50 celebrations.

Yes, you can croon your way through Motown classics of the 1960s and 70s to score points, to beat your mates or just because you fancy a singalong now that the pubs have closed and you're half cut. If you've already got the microphones, just slap in the disc to access everything from Mary Wells and Marvin Gaye to Rick James and the Commodores.

Around 30 tracks in total, which you can pick up for £17.99 for the PS3 version (PS2 also available with slightly less tracks). See over the page for the full tracklisting.

Thanks to @lizpops for the tip off!

David Ruffin – Put A Little Love In Your Heart
Diana Ross & The Supremes – Reflections
Jimmy Ruffin – What Becomes Of The Broken Hearted
Lionel Richie – My Destiny
Martha Reeves & The Vandellas – Jimmy Mack
Martha Reeves & The Vandellas – Nowhere To Run
Marvin Gaye – Let's Get It On
Marvin Gaye – What's Going On?
Marvin Gaye & Kim Weston – It Takes Two
Mary Wells – My Guy
Rick James – Super Freak
Smokey Robinson – Being With You
Smokey Robinson And The Miracles – The Tracks Of My Tears
Stevie Wonder – For Once In My Life
The Commodores – Brick House
The Commodores – Easy
The Contours – Do You Love Me
The Four Tops – Reach Out I'll Be There
The Isley Brothers – This Old Heart Of Mine (Is Weak For You)
The Jackson 5 – ABC
The Miracles Love Machine
The Supremes – You Can't Hurry Love
The Temptations – Get Ready
The Temptations – Papa Was A Rollin' Stone
The Velvelettes – Needle In A Haystack
The Four Tops – I Can't Help Myself (Sugar Pie, Honey Bunch)
The Jackson 5 – I Want You Back
Martha Reeves & The Vandellas – Dancing In The Street
Marvin Gaye I Heard It Through The Grapevine
The Supremes – Stop In The Name Of Love