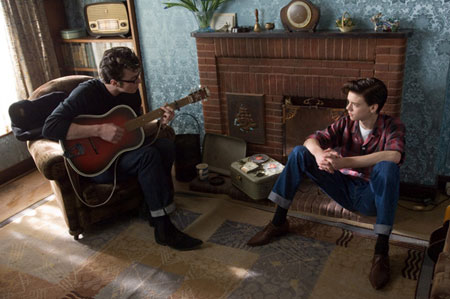 The critically acclaimed directorial debut of Sam Taylor-Wood gets a DVD and Blu-ray release in a matter of weeks – Nowhere Boy.

As you probably know, it's the film of John Lennon's teenage years in 50s Liverpool, from first band The Quarrymen to his early relationship with Paul McCartney and George Harrison, all of which culminates in the formation of The Beatles and their historic trip to Hamburg. Aaron Johnson takes the lead role, with support roles for Kristin Scott Thomas as Aunt Mimi and Anne Marie Duff as Lennon’s mother Julia.

Plenty of extras too, including a director's Commentary with Sam Taylor-Wood, a Lennon’s Liverpool featurette, the re-creation of Lennon and the Quarrymen featurette, Anatomy of the scene: 'That’s When I Stole Him' featurette, an extended interview with Sam Taylor-Wood and three deleted scenes, introduced by the director. May 10th 2010 is the shelf date, but you can pre-order now from just over £10.