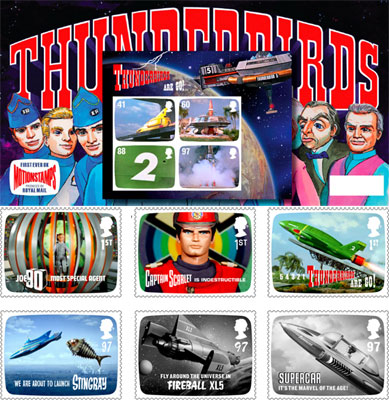 Not just any old retro stamp issue, FAB: The Genius of Gerry Anderson stamps also feature action sequences that work with a flick of the wrist.

Buty let's start with the stamps. The basic set features six landscape stamps featuring all of Gerry Anderson's Supermarionation TV shows from the 1960s – Supercar, Fireball XL5, Stingray, Captain Scarlet and Joe 90. Plenty of presentation packs as you would imagine, all with their own added extras. But we like the one with a special pull-out four-page comic, which tells the story of the creation of the Thunderbirds through the illustrations of original TV21 comic artist, Gerry Embleton. Nice.

But it's not the star of the show. As part of the issue, there's also a miniature sheet is made up of four new stamps featuring Thunderbirds 1 to 4. The sheet is printed using 'microlenticular technology' so that when tilted the stamps show each vehicle’s launch sequence. Now that's got to be impressive for your post.

All will be available and from larger Post Office branches from 11th January 2011 from…well…the price of a stamp.