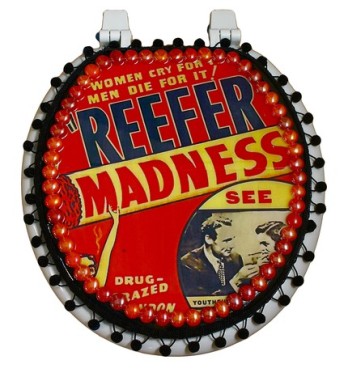 I think it is safe to say that this is the first time that we have featured a toilet set here and it will probably be the last time too. And whilst I’m by no means suggesting that this item is the most tasteful or something that every home should have, if you are a huge fan of exploitation movies, then you this Reefer Madness Toilet Seat might be be of interest to you, At the very least it is a good excuse to mention a cult classic film.

Filmed in the 1930s, originally intended as a cautionary tale funded by a church group, the film was recut for the exploitation film market and found cult fame when it was rediscovered in the 1970s. The toilet seat has been decoupaged with the poster for the film and decorated with red glass stones and a black ball fringe. You’ll be pleased to know that it has also been finished with an acrylic coating to prevent any water damage.

Should you wish to purchase the Reefer Madness Toilet Seat, it costs around $79.99 (around £52) plus shipping from Toiluxe on Etsy.