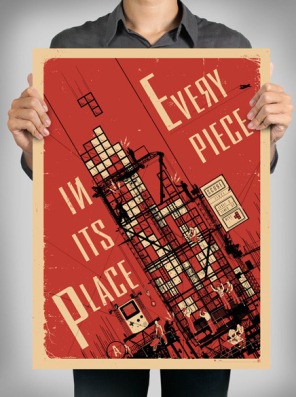 Mixing Soviet-era propaganda with retro gaming is a winning combination for this Every Piece in its Place print from Pop Chart Lab.

Their website claims it is a recently unearthed piece of Soviet propaganda that reveals the origins of the game Tetris, which would be brilliant if it was true, but as it is, it is a just a cool idea for a print. The style is very much that of Soviet propaganda posters (always great to look at, even if you didn’t agree with the politics behind them) but the Nintendo Gameboy in the design gives the game away. The print has a limited first edition run of 500, each being signed and numbered by the artists.